A multi-format LTO-7 archiving recorder that also offers a generous 6 TB of internal storage for backup, the LTR-200HS7’s ability to support broad video codecs accommodates many archiving needs. Useful in both archiving and exchange of recorded material or programs, highlights of this full-featured LTFs-based recorder unit include HD/SD-SDI input/output, broadcast-quality codecs, and MXF (OP-1a) wrapping and unwrapping. MXF or MOV files on LTO tape can also be used with NLE systems. 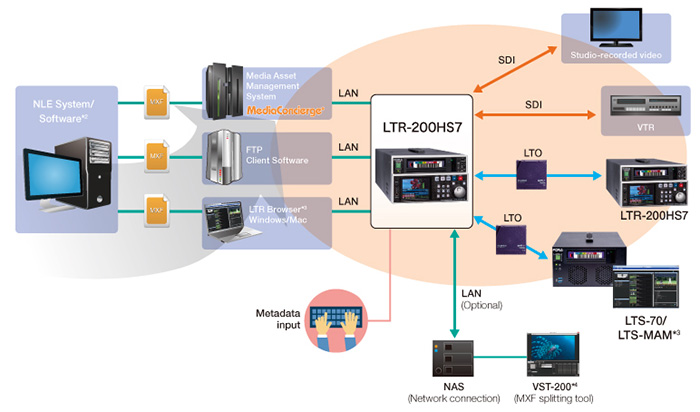 As material is recorded, export MXF files to a NAS device as they are created, using an optional LTR-NAS plug-in, and then back up the edited MXF files to LTO tape as needed.

Broad codec and format support includes MPEG-2 and AVC-Intra as well as Avid DNxHD®, and DVCPRO. For programs and other assets, the ability to offer this broad support is an advantage in applications that demand high-quality archiving.